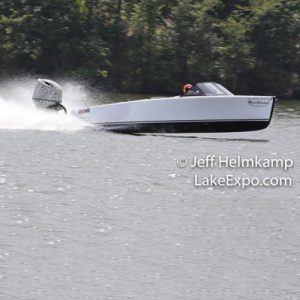 Electric-powered boats made their debut at the Shootout in 2018, with a 25 mph run by Randy Vance in Calypso. Now, three years later, the Vision Marine Technologies-powered Bruce 22 hit 49 mph in its final run. 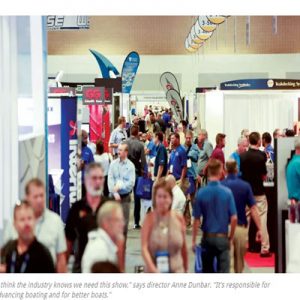 “One of the exhibitors generating serious buzz is Vision Marine Technologies, the company building the 180-hp E-Motion electric outboard. The Canadian corporation is “what IBEX is all about,” Dunbar says. 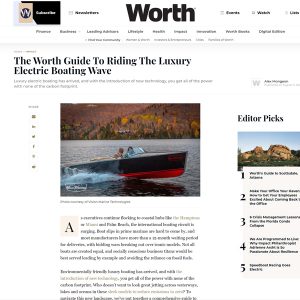 The Worth Guide To Riding The Luxury Electric Boating Wave

Luxury electric boating has arrived, and with the introduction of new technology, you get all of the power with none of the carbon footprint 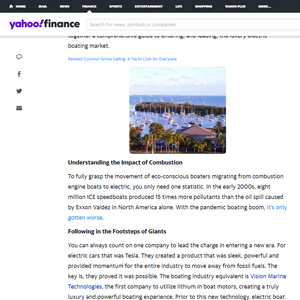 The Worth Guide to Riding the Luxury Electric Boating Wave

As executives continue flocking to coastal hubs like the Hamptons or Miami and Palm Beach, the international boating circuit is surging. Boat slips in prime marinas are hard to come by, and most manufacturers have more than a 12-month waiting period for deliveries, with bidding wars breaking out over iconic models. 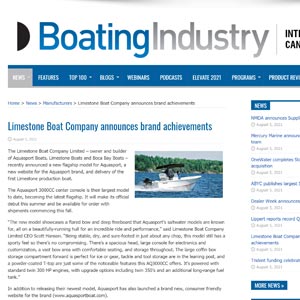 The Limestone Boat Company Limited – owner and builder of Aquasport Boats, Limestone Boats and Boca Bay Boats – recently announced a new flagship model for Aquasport, a new website for the Aquasport brand, and delivery of the first Limestone production boat.

The Worth Guide To Riding The Luxury Electric Boating Wave

Luxury electric boating has arrived, and with the introduction of new technology, you get all of the power with none of the carbon footprint

The Worth Guide to Riding the Luxury Electric Boating Wave

As executives continue flocking to coastal hubs like the Hamptons or Miami and Palm Beach, the international boating circuit is surging. Boat slips in prime marinas are hard to come by, and most manufacturers have more than a 12-month waiting period for deliveries, with bidding wars breaking out over iconic models. 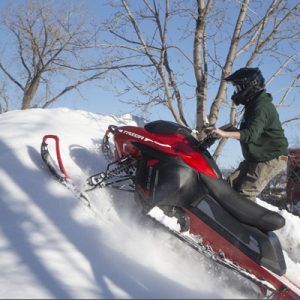 Electric snowmobiles, boats and ATVs mean you can enjoy the quiet wild

If you are like a lot of Canadians, you enjoy spending time in the great outdoors. But if you prefer the sounds and scents of nature to the din and fumes of motorized vehicles, your options have been limited to human-powered ways of getting around. 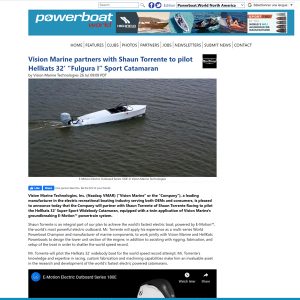 Vision Marine Technologies, Inc. (Nasdaq: VMAR) (“Vision Marine” or the “Company”), a leading manufacturer in the electric recreational boating industry serving both OEMs and consumers, is pleased to announce today that the Company will partner with Shaun Torrente of Shaun Torrente Racing.. 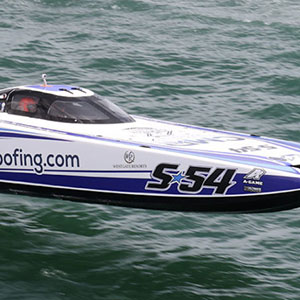 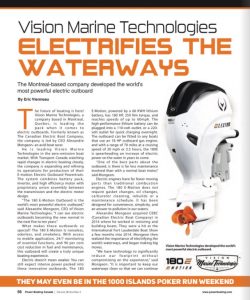 Cars are not the only things going electric, boats are next - Vision Marine Technologies CEO

Alex Mongeon is the CEO of Vision Marine Technologies (NasdaqCM: VMAR), a company that produces the electric boats and the technology behind electric motors for boats. 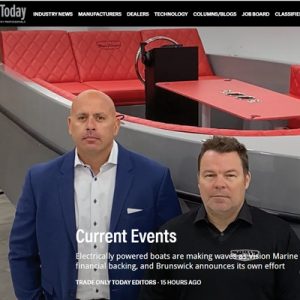 Electrically powered boats are making waves as Vision Marine Technologies and Pure Watercraft get serious financial backing, and Brunswick announces its own effort

Is 2021 the year that electric boats and power trains enter the mainstream? 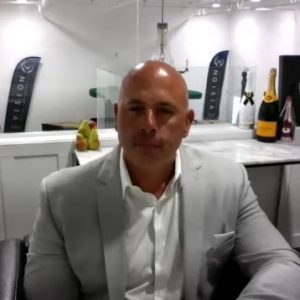 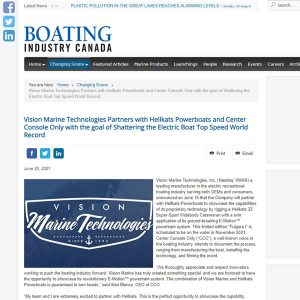 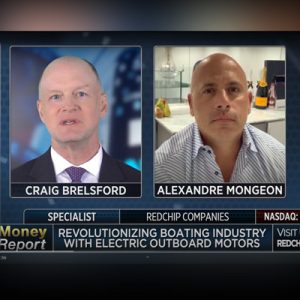 Vision Marine Technologies (NASDAQ: VMAR) strives to be a guiding force for change and … 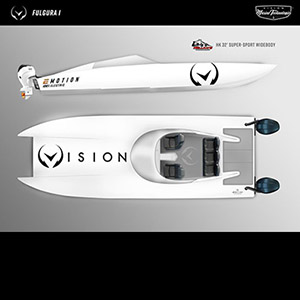 Not only is the 180E the world’s most powerful electric outboard, but it could soon become the world’s fastest. Vision has teamed up with Hellkats Powerboats in an effort to push the all-out electric boat world speed record up over 100 mph (161 km/h). 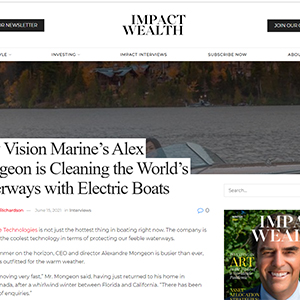 Vision Marine Technologies is not just the hottest thing in boating right now. The company is also offering the coolest technology in terms of protecting our feeble waterways. And with summer on the horizon, CEO and director Alexandre Mongeon is busier than ever, getting boats outfitted for the warm weather. 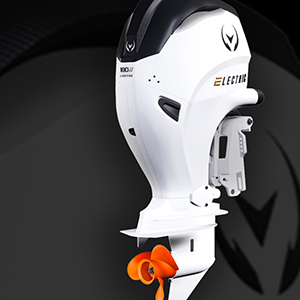 Today, there seems to be two adjacent trends occurring in the marine industry: combustion engines are getting larger, and more electric technologies are starting to emerge, most commonly for inboard applications. Canadian-based Vision Marine Technologies is challenging this divide with its new E-Motion 180E, which is reportedly the world’s most powerful electric outboard. 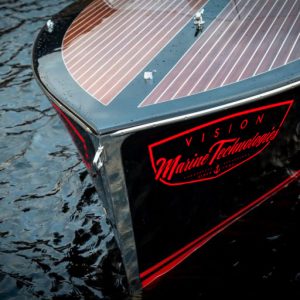 The future of boating is here! Vision Marine Technologies, a company based in Montreal, Quebec, is leading the pack when it comes to electric outboards. The company, which was formerly known as The Canadian Electric Boat Company, is lead by CEO Alexandre Mongeon- an avid boat racer. 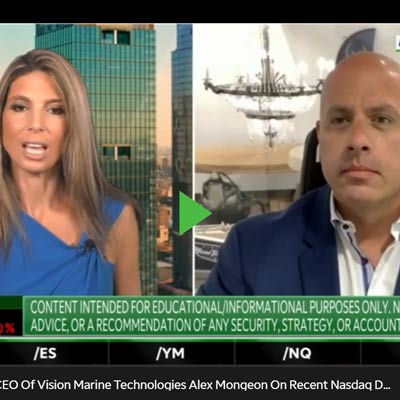 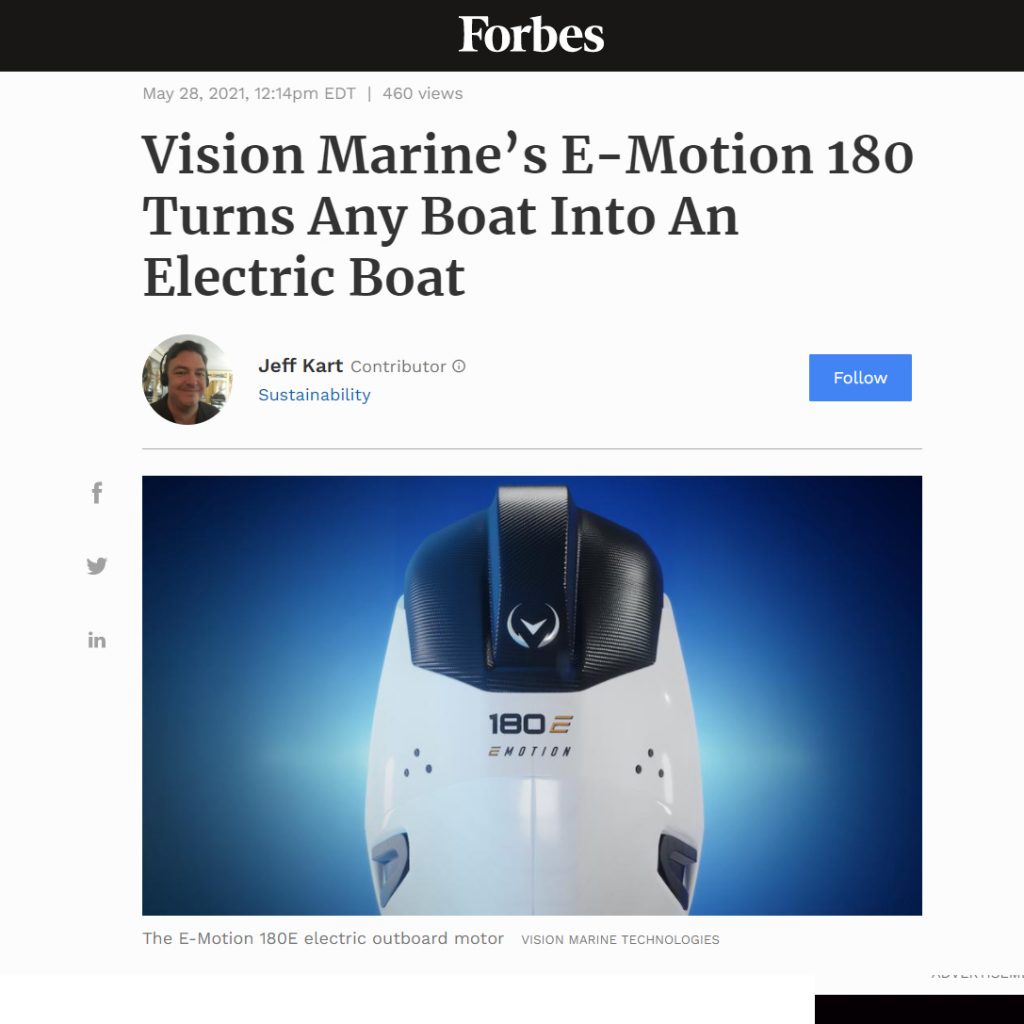 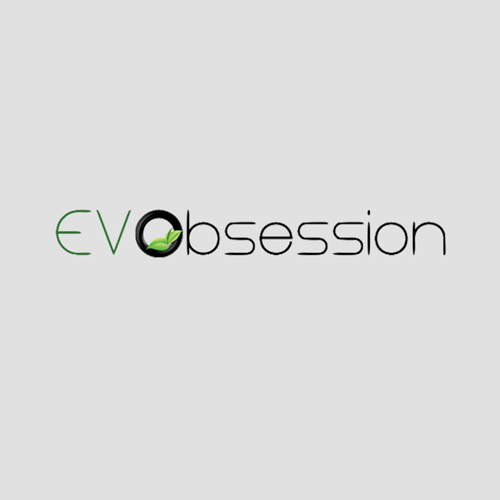 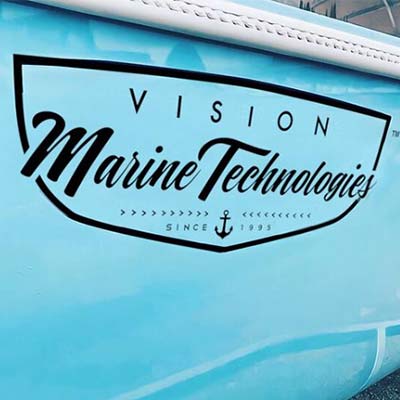 We're Going to Need a Bigger Boat for SPAC Mania

Vision Marine, a maker of battery-powered boat motors, shares a lot in common with other electric vehicle up-and-comers, minus the market hype.

The CEO of Vision Marine Technologies (VMAR), Alex Mongeon, says that the company utilizes lithium battery technology and is the first electric boating company to be publicly listed in December 2020. 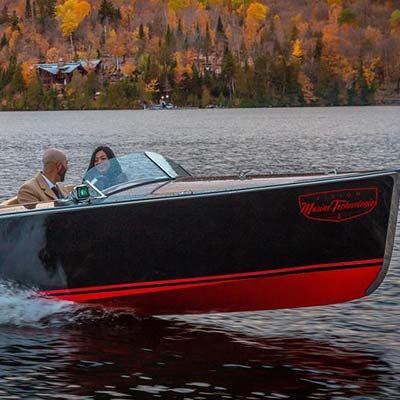 Not all boats make noise, or even waves. Like electronic cars, they are quieter and cleaner than their traditional gas- and diesel-powered counterparts.

The Limestone Boat Company Limited – owner and builder of Aquasport Boats, Limestone Boats and Boca Bay Boats – recently announced a new flagship model for Aquasport, a new website for the Aquasport brand, and delivery of the first Limestone production boat. 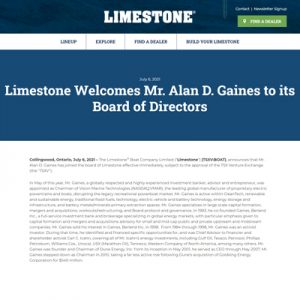 Limestone Welcomes Mr. Alan D. Gaines to its Board of Directors

Collingwood, Ontario, July 6, 2021 – The Limestone® Boat Company Limited (“Limestone”) (TSXV:BOAT), announces that Mr. Alan D. Gaines has joined the board of Limestone effective immediately, subject to the approval of the TSX Venture Exchange (the “TSXV”).

Limestone Boats said it completed its acquisition of Ebbtide Holdings, the manufacturer of the Aquasport and Boat Bay brands.

Shaun Torrente is an integral part of our plan to achieve the world’s fastest electric boat, powered by E-Motion™, the world’s most powerful electric outboard. Mr. Torrente will apply his experience as a multi-series World Powerboat Champion and manufacturer of marine components, to work jointly with Vision Marine and HellKats Powerboats to design the lower unit section of the engine, in addition to assisting with rigging, fabrication, and setup of the boat in order to shatter the world speed record. Mr. Torrente will pilot the Hellkats 32’ widebody boat for the world speed record attempt. Mr. Torrente’s knowledge and expertise in racing, custom fabrication and machining capabilities make him an invaluable asset in the research and development of the world’s fastest electric powered catamarans.

Mr. Torrente’s racing career began in the United States when he was 15 years of age, going on to become an SST-120 (F2) World Champion twice in 2002 and 2003, before moving up and winning the North American F1 Championship three times. Mr. Torrente’s first full Formula 1 Powerboat World Championship season was in 2011, with Team Qatar. From 52 starts, Mr. Torrente finished on the podium fourteen times, winning nine races, and qualifying for pole position nine times.

The Florida native finished runner up in the world title competition in 2013 and 2016, and on two occasions placed third overall. After three terms with Qatar, he joined the Victory Team at the Grand Prix of France in 2015, before moving to Team Abu Dhabi at the end of 2017.

Vision Marine Technologies, Inc., strives to be a guiding force for change and an ongoing driving factor in fighting the problems associated with waterway pollution by disrupting the traditional boating industry with electric power, in turn directly contributing to zero pollution, zero emission and a noiseless environment. Our flagship outboard powertrain (“E-Motion™”) is the first fully electric purpose-built outboard powertrain system that combines an advanced battery pack, inverter, and high efficiency motor with proprietary union assembly between the transmission and the electric motor design utilizing extensive control software. Our E-Motion™ and related technologies used in this powertrain system are uniquely designed to improve the efficiency of the outboard powertrain and, as a result, enhance both range and performance. Vision Marine continues to design, innovate, manufacture, and sell handcrafted, high performance, environmentally friendly, electric recreational power boats to customers. The design and technology applied to our boats results in far greater enhanced performance in general, higher speeds, and longer range. Simply stated, a smoother ride than a traditional internal combustion engine (ICE) motorboat.

We are a leading boat manufacturer, specializing in powerboats and using the latest advancements with the infusion of fiberglass and core construction in our hulls and decks. We use state-of-the-art materials in all our powerboats. Our company motto is not only to have a good looking and fast catamaran, but one that is safe and is built with the best labor and material in the market.

We are a leading performance catamaran boat builder in South Florida. Our most popular performance is a 30’ Sport Catamaran that as of January 2020, holds the unofficial record for being the fastest 30’/44’ small tunnel catamaran that has run up to speeds of 124 mph.