It's the first time a battery-powered speedboat has surpassed 100 mph.

An electric boat just broke the all-time speed record for battery-powered watercraft, reaching a top speed of 109 mph. And while internal combustion-powered boats have long been able to surpass triple-digit speeds, this boat absolutely shattered the previous electric speed record for watercraft, which sat at a mere 88.6 mph.

The boat was constructed by Vision Marine Technologies, which bills itself as “the global leader in the electric recreational marine propulsion industry.” In a press release published today (and brought to our attention by Electrek), Vision Marine announced the record-breaking run, which took place at the Lake of the Ozarks Shootout, an annual boat race that raises money for charity.

The record-breaking electric boat, called V32, is a 32-foot catamaran that was specially designed to carry two Vision Marine E-Motion electric outboard motors along with the necessary batteries to power them. The boat was piloted by Shaun Torrente, a world champion in the Formula 1 Powerboat World Championships, a.k.a. F1H2O. Yes, there’s a Formula 1 for boat racing. 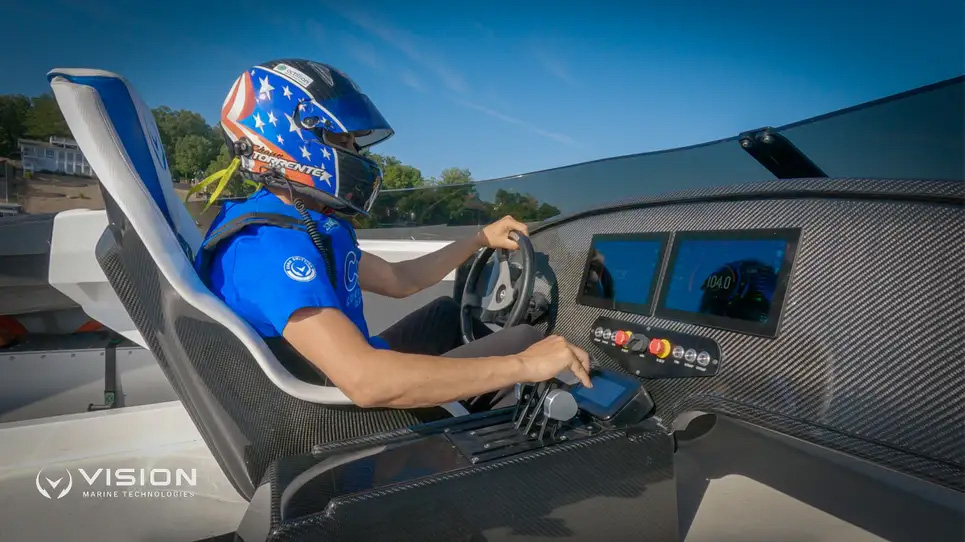 “We are here today to instill a new legacy by proving once again that a transition to electric power in the marine industry is at arm’s reach,” Vision Marine CEO and co-founder Alex Mongeon said in a press release announcing the new speed record. “We are this much closer to eliminating the colossal carbon footprint our planet is experiencing due to continued usage of ICE engines.”

Incidentally, the previous electric boat speed record of 88.61 mph was set by Jaguar Vector Racing in June 2018. The team, which was sponsored by Jaguar, used expertise from Jaguar’s involvement in Formula E to develop a high-speed enclosed racing boat powered by batteries.

Pilot the fastest electric boat in the world in first person - Live the excitement of breaking the world record!